IMPROVE YOUR VISION. CHANGE A LIFE

When you choose LASIK at Medical Eye Center, you’re partnering with us to provide life-changing cataract surgery for a blind person in need. We call it our Global Partners Program. For every LASIK surgery performed, your surgeon will personally sponsor one sight-restoring cataract surgery in Nepal, Ghana, or Ethiopia, through the Himalayan Cataract Project.

Cataracts are the leading cause of blindness worldwide, accounting for more than 18 million needlessly blind. While most global health challenges cannot be easily cured, cataract blindness is a striking exception. Cataract blindness can be cured “overnight” with a 10 minute procedure, for as little as $25 per eye. This is why the World Bank has called cataract surgery “one of the most cost-effective public health interventions available.” 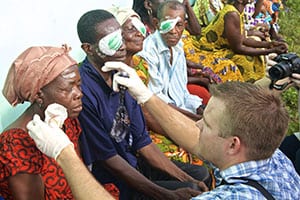 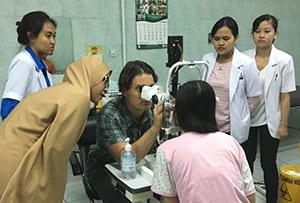 GIVE SIGHT, GIVE LIFE

“I felt useless, nothing but a burden to everyone. I will always be grateful to the doctor for restoring my sight and giving me my life back.” —Eskedar Haji, 15, Ethiopia 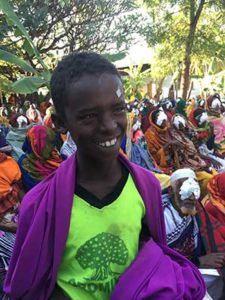 When we talked to Eskedar the day he regained his eyesight. “I couldn’t go to school since there are no schools for blind children like me,” says Eskedar. “I was not able to walk alone and also not happy that I had to depend on my brothers and sisters to move from place to place when I needed. I felt useless. Nothing but a burden to everyone.”

Eskedar was one of 40 children who underwent surgery during a cataract campaign in Harar. Working with local partners, the team provided over 1200 sight-restoring cataract surgeries in six days.

“It took me for a while to believe that I can see. I thought I was dreaming. I am so very happy,” said Eskedar,. His father, overwhelmed by happiness, was shouting from a distance saying, “This is a special day in my life, I will consider it his new birthday.”

Dr. Matt Oliva oversees the Himalayan Cataract Project’s Ethiopia program. Dr. Oliva left a strong impression on Eskedar. “I can’t thank enough the ferenji (foreign) doctor who operated on me and all the hospital team. I will always be grateful to him and the others for restoring my sight and giving life back.”

With many other patients laughing and singing in the background, Eskedar realized his life would be different from now on. “I can’t wait to join other children at school now. I willl walk among them with pride. I will study hard and become an eye doctor.” 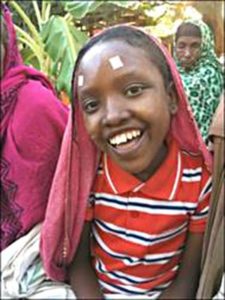 Eight-year old Nunu Weleye came to the cataract outreach campaign organized by the Himalayan Cataract Project in December 2016. She came with her father, traveling from the district of Kurta Challa, Ethiopia. Nunu was just one year of age when she lost her eyesight. At birth, both of her eyes were affected by congenital cataract, causing her eyesight to quickly deteriorate. She became completely blind as a toddler.

During this particular campaign in Harar, over 1200 people regained their eyesight and Nunu was one of 40 children who underwent surgery. Before her bandages were taken off, we asked her to tell us more about herself and what it was like to live in blindness. Nunu recall, “I had to depend on my family to walk and move around. In most cases, I preferred staying at home the whole day. I had no chance to go out and play with friends. They would not let me play with them even if I wanted to because of my blindness. Everyone laughed at me.”

Young children with disabilities living in remote regions of the world often carry the additional burden of stigmatization. There is little to no infrastructure available to accommodate special needs, so many children are destined to live in isolation.

“I was not given a chance to go to school because I am blind. No one bothered to help me. I used to cry every time I heard children talking about school and I was always worried about what will happen to me in the future.”

Nunu’s father stood by her side throughout the whole process. The morning after surgery, when her bandages were taken off, Nunu felt very confused. “I couldn’t figure out what I was feeling at first. At the beginning I was shocked, because I never thought I would see again. Now I am the happiest girl in the entire world and I can’t wait to go back home and show all my friends that I can see just like they do. I know they will let me play with them this time. I also want to go to school. I am so excited.”

The blindness of a child is a hardship and burden for the whole family. Taking care of a blind child becomes another job and often requires another family member to care for that child—detracting from the caregiver’s ability to work or to attend school if they are a sibling. At her young age, Nunu already seemed very aware of this fact. “My parents suffered with me all this time. Now a time has come for me to pay them back. I am going to help them in every possible way from this moment on. I am so thankful to the doctor who gave me my sight back. Thank you!” 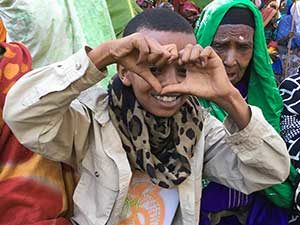 Since losing sight in his right eye several years ago, 13-year old Henok Lema from Kulbi, Ethiopia, had almost given up on his dream of becoming an engineer. His poor vision was holding him back in school and he was no longer able to perform as well as his classmates. Even his mother, witnessing the struggle, was discouraged and suggested that he leave school. Henok started to lose hope until something unexpected happened. Someone came to speak with his mother and told the family about an upcoming cataract surgical campaign—something unimaginable for them.

“When I learned that my mother was talking about a surgery event at Bisidimo Hospital in Harar, I had such a strong feeling that a time has come for me to leave my problems behind,” said Henok.

We wanted to know more about Hedok’s life and asked him about the difficulties he faced after he became blind in one eye. “My friends made fun of me because of my condition. They would call me ‘One Eyed Boy.’ Everyday I felt troubled and ashamed because I wan unable to see with my right eye. I had difficulty seeing from a distance and seeing objects on the right side.”

“Because of the bullying I lost interest in playing with my friends and did not like going to school anymore. My mother saw all this trouble and advised me to drop out of school. But I found it difficult to quit my dream to become an engineer so easily and I kept going. It wasn’t easy to go to school being in such a situation, and sometimes, I was seriously considering my mother’s advice.”

The day after his surgery, as his bandages were taken off, Henok shared his excitement, and said he couldn’t wait to find his friends and tell them the good news. “I will regain the respect I had before becoming blind,” Henok said. “I am so grateful to my doctor and always love him for fixing the problem I had with my right eye. Thank you!”

This video shows a Himalayan Cataract Project outreach in Arba Minch, Ethiopia, capturing the moment patients realize their sight has been restored. Ethiopia has one of the highest rates of blindness in the world with an estimated 500,000 blind from cataracts. In all, 608 patients underwent sight-restoring surgery.

You can also help by donating directly to the Himalayan Cataract Project —every donation makes a difference!